The Pneumatically Stabilized Platform (PSP) system permits the design and construction of very large-floating platforms of unlimited size. PSPs may be deployed in regions with extreme wave heights and achieve more stability then achieved by any other known technology. Since a PSP is also a breakwater, it will allow the docking of vessels on the down wave sides which permits the safe transfer of materiel and people to and from the platform. The PSP is a patented design concept for large floating platforms, in which the flotation force is derived from an array of open-bottom cylinders tapping pressurized air that displaces the water.

Wave and Wind Renewable
The PSP forms an essential offshore floating support base for the Rho-Cee WEC and can simultaneously provide a stable supporting platform for and ready maintenance access to, both large offshore Wind Turbines and submerged Ocean Current Turbines. 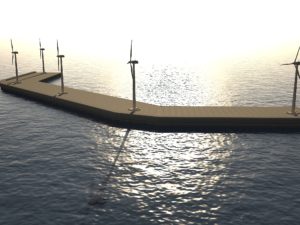 Offshore wind and wave power can be remarkably complimentary. Given an extended, stable floating platform to share, important economies of renewable power production and energy storage are possible. Structural stability allows any standard Offshore Wind Turbine to be deployed easily:

-  Storage of spare and repair parts.

-  No new specialized vessels needed to transport equipment or personnel directly from ports to platform.

The Pneumatically Stabilized Platform (PSP) embodies such a platform. Developed with Defense Advanced Research Project Agency support and proved in model scale, the PSP will achieve its at-sea motion stability and structural loads mitigation by decoupling the “hull” from ocean wave pressures through the partial use of air buoyancy.

In addition to supporting an array of Wind Turbines, the PSP deploys along its seaward edge the “Rho-Cee” WEC, termed the “Impedance-Matched Terminator”, comprising a nested set of tuned OWC absorbers, resonant across a selected frequency band. By means of impedance matching, highly efficient wave energy absorption is demonstrably achieved.

The PSP and Rho-Cee WEC are constructed modularly, of pre-stressed reinforced concrete, which is degradation-free in long term exposure to sea water – and only concrete touches sea water in the platform system.
All equipment subject to maintenance, replacement or inspection is “in-the-dry”– fully accessible to platform-resident personnel on foot, dry-shod. With integral foundations, WTs deployed upon such a floating platform can be positioned offshore in the greater water depths favorable to the WECs thusly avoiding bottom losses of wave activity. 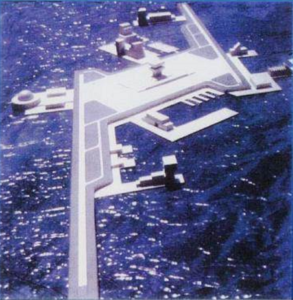 FloatPort, the defining PSP concept of Float Incorporated, was first introduced in 1993. This transportation hub provides an international airport as well as a terminal for commuter and maritime traffic. The Pneumatically Stabilized Platform was originally designed as a means for constructing a new airport for San Diego in the Pacific Ocean, 3 miles off the tip of Point Loma. Known as "FloatPort", it would make San Diego the only deep water shipping port on the west coast and provide the world with its first land, air and sea inter modal transport center. Connected by a tunnel to the western terminus of Interstate 8, one of the city's main collector freeways, FloatPort would be as convenient as San Diego's Lindbergh Field is now. 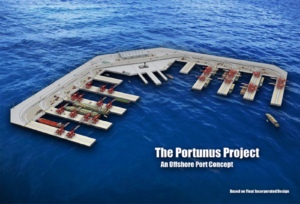 In May 2002, Float Inc. proposed a port security strategy titled "Beyond the Horizon" and published a white paper which was distributed to most of the agencies that are involved in homeland security. Although the Department of Homeland Security was not yet established, the idea received much favorable response.

Float Inc. has suggested the following uses of the PSP which could provide them with capabilities that would substantially reduce costs. PSP technology would enable LNG producers to combine processing, treating, storing, and liquefaction of natural gas, as well as its loading onto LNG tankers, on one floating PSP facility. This should not only reduce the cost of servicing near shore gas fields, but enable the development of gas fields farther from shore or in deeper water. Oil producers could build a refinery on a PSP. Refined products could be shipped directly from the platform and the need to ship crude oil would be eliminated. In both cases, when a field plays out, the assets are recoverable. Float is actively seeking working relationships with oil and gas development projects or engineering companies that are interested in these cost savings.

Other multi-use applications include: 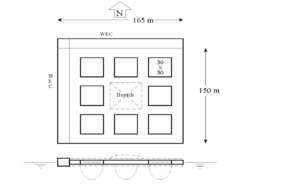 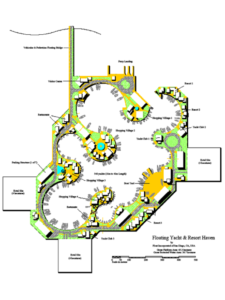